It can be difficult to distinguish rye bread from pumpernickel bread. They are both made from rye wheat and they almost have similar appearances and taste. So if they are alike in a lot of ways, what sets them apart from each other? 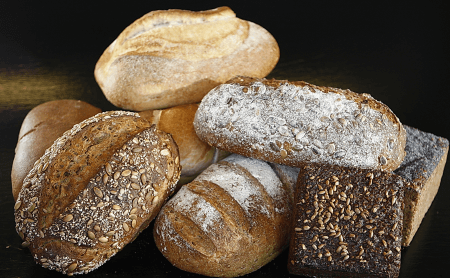 Rye bread is a type of bread that originated in Eastern Europe, Scandinavia, and Russia. It is made from a combination of rye and wheat flour (since the gluten in rye flour is not enough to make it rise, wheat flour is added to the dough). It can be light brown or deep brown. Light rye bread is made using white rye flour which is produced by crushing the rye berry without the seed coat. Dark rye bread is made with white rye flour but may contain coffee, molasses, or cocoa. Traditionally, however, dark rye bread was made from a type of flour produced by crushing the outer endosperm of the rye berries.

Rye is dense and flavorful. It also contains a high fiber content and a low fat content. It is preferred by health enthusiasts because of its low glycemic index which means it can be consumed without causing the blood sugar to increase abnormally.

On the other hand, pumpernickel bread originated in the Westphalia region of Germany. Traditional pumpernickel is made by using 100% pumpernickel flour, a heavy type of flour that is produced by grinding rye berries. The bread is then baked and left to steam in the oven for more than 15 hours. The low and constant heat causes the starch in the rye to caramelize, thus the deep brown color and earthy aroma of pumpernickel. It is compact, dark, and has a powerful flavor. Its crust is firm but it is moist inside. Real pumpernickel does not contain artificial flavors and colors but may have caraway seeds to enhance the taste.

Pumpernickel used to be a peasant food but is now popular in delicatessens. Nowadays, it is made with rye flour, wheat flour or leavening agents, artificial coloring, and flavorings such as cocoa, chocolate, and coffee.

What, then, is the difference between rye bread and pumpernickel bread?

Both rye bread and pumpernickel bread are made from rye. However, rye bread can be a combination of rye flour and wheat flour and is made by the conventional process of baking. Pumpernickel, on the other hand, is made from 100% rye flour (called pumpernickel flour) and once the bread has been baked it is steamed in the oven for over 15 hours.

Rye bread can be light or brown depending on the type of flour, flavoring, and coloring used. Pumpernickel bread contains no artificial food coloring or flavoring but is usually dark because the starch it contains caramelizes in low and constant heat.