Difference between Was and Were

By: Editorial Staff | Updated: Nov-12, 2021
The contents of the Difference.guru website, such as text, graphics, images, and other material contained on this site (“Content”) are for informational purposes only. The Content is not intended to be a substitute for professional medical or legal advice. Always seek the advice of your doctor with any questions you may have regarding your medical condition. Never disregard professional advice or delay in seeking it because of something you have read on this website!

It is very important to follow grammar rules to communicate effectively. One of the many parts of speech that adds meaning to a sentence is the verb tense. When verb tense is used incorrectly, sentences sound very confusing!

Verb tenses do not only apply to action verbs. Linking verbs, like “is” and “are,” also have past forms, which are “was” and “were,” respectively. These verbs are not interchangeable as their usage depends on the subject. This article will discuss the difference between the two. 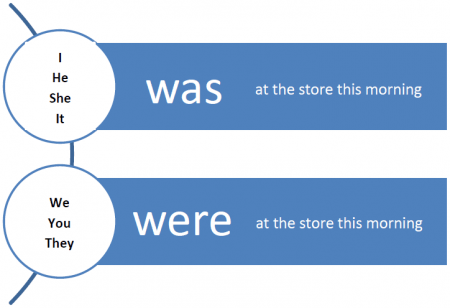 The verb was is the past tense of the verb “is.” It is used with:

On the other hand, the verb were is the past tense of the verb “are.” It is used with:

It is important to note, however, that the pronoun “I” uses the verb “were” if it is used in the subjunctive mood, or in statements that are not real or are hypothetical. For example:

What, then, is the difference between was and were?

As a general rule, in simple past tense, was is used for singular subject and were for plural. For example, I was going to school and we were going to the park.

However how to use “If I were” or “If I was” is a classic English grammar debate. This grammar rule may seem complicated for non-English speakers at first, but if you remember the know how, you’ll always get it right!

If I were a rich man, I would be building a house right now.

This sentence may seem strange to some people because “I was” seems to be the correct choice. But in this sentence, you are imagining a hypothetical situation or talking about things that are contrary to fact.

Use were after “I” when you can follow each statement with “But I’m not.” This is the easiest way to tell whether you may be using if I were correctly.

Another examples of hypothetical situation statements are given below:

Example 2: If I were you, I would definitely do this instead of that.

Example 3: If I were you, I would probably go on a holiday with my family this year.

Example 4: If I were you, I would take advantage of these opportunities and use them to our advantage.

Example 5: If I were an actress, I would I would be on Broadway right now.

When to Use If I Was?

Use was after “I” in conditional sentence when you are talking about something that actually happened. For example, “If I was late for class when I was a teenager, my teachers grounded me.” Another example, “I apologize if I was not clear enough”.

In those sentences, each sentence is true.

Was vs Were in Passive Voice

In English, there are two kinds of sentences: active and passive. Active sentences have a subject and an object, and the verb describes the action.

Passive sentences don’t have a subject or an object, and the verb describes the state of being rather than the action itself.

Active voice sentences are usually short and to the point. They are often good writing, but they are also sometimes boring.

Passive voice sentences are usually long and wordy. They are often good writing, but they can be hard to understand as well.

There is a trade-off between readability and accuracy in both cases, although there is a difference between the two.

But the verbs ‘was’ or ‘were’ don’t automatically suggest that the sentences are passive voice. We create passive voice by pairing a conjugation of ‘to be’ with a past participle of a different helping verb.

Let’s look at an example:

“The ball was hit by Jones yesterday.” (a passive voice).

“My sister cleaned the house last night.” (an active voice).

“The house was cleaned by my sister last night.” (passive voice).

“The house was clean and tidy.” (an active voice).

“The teacher answered my questions.” (an active voice).

“My questions were answered by the teacher).” (passive voice).

Examples paragraph using was and were

When I was young, I used to play with my friends in the park. I was the only girl there and it was fun. Sometimes, my friends would give me things to do for them.

If they did, I would take the things back after they were done with them. This always made me feel very important because I was important to my friends.

One day, I was playing with my friends in the park and I saw a girl who was smaller than me. I went up to her and asked her if she wanted to play with us.

She said yes and we played together for a while. After that, I played with her a lot. She was a very nice girl and I was happy to play with her. She never asked me for anything.

I liked playing with her because she never made me feel like I was too important to her. One day, she went home and I went back to playing with my friends in the park. I didn’t see her for couple weeks after that.

When I got there, they told me that she moved to another state. It made me feel sad when they told me this because she was my friend and I missed her very much.

Difference between Subject and Object Pronouns
Boost your knowledge
Sign up for our newsletter to get comparisons delivered to your inbox.
Recent posts